Twisted Manzanita Ales & Spirits, formally known as Manzanita Brewing Company, has only been around for a few years but they’re making some spectacular brews. This week on the show their head brewery, Daniel Cady, joins us to share some of their best. First on deck is an India pale lager named Tinfoil Hat that they brewed in conjunction with San Diego Brewing Company. The unique thing about this IPL is the use of an Alt-Bier yeast, instead of standard Lager yeast. The yeast character really shines through, and the citrusy aspect of the hops really work well. This isn’t a grassy hop bomb, but its balance is quite refreshing. 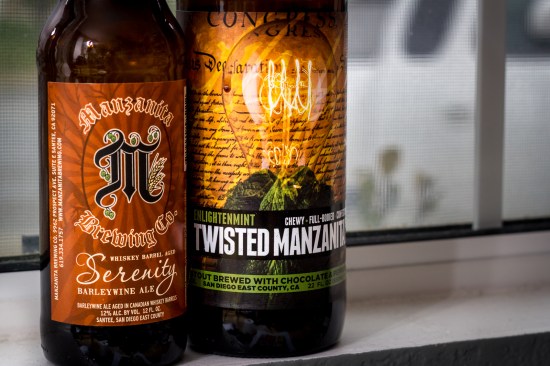 Next up is Twisted Manzanita’s delicious chocolate mint stout named Enlightenmint. Clocking in around 8% ABV, and finishing it’s fermentation at around 7° Plato, this beer is like drinking chocolate ice cream. It’s really something great. Big body and minty aroma, followed by a thick, sweet chocolate backbone. This is definitely worth picking up if chocolate and mint is your jam.

This is where we get into the heavy hitters, as if 8% ABV wasn’t enough, and break out the sippers. First up is a brew from the original Manzanita Brewing Co branding, batch 1 of the Serenity barleywine, coming in at just around 3 years old, and aged in whiskey barrels. The beer is incredibly smooth and deceivingly easy to drink. The barrels shine through just like they should, and the body is just right. The beer is slightly oxidized, but it only enhances the character even more.

The next beer is pretty special. It’s an “iced” version of the Serenity barleywine, in that it was ice distilled. Daniel gets into the logistics of how this was done on the show. This beer was not available to the public, but since we happen to know the brewer, we get to try it. Lucky us, right?! In short, this beer is boozy, but still fairly well balanced.

The final beer is a sour that was blended just for the show and it’s named after a part number in the McMaster Carr catalogue…really, it is, and Daniel gets into why that is. Pretty rad, indeed. Daniel talks about the sour mashing that went into making this beer, and the many strains of brettanomyces from Europe that he got to experiment with in order to get the final product.

Big, big thanks to Daniel and the folks at Twisted Manzanita for the insight and fantastic brews. Twisted Manzanita has a big future if they keep up the quality of the beers they’re brewing, and we couldn’t be more stoked on what’s to come from them.