Season 1, Episode 8 – This week, we’re once again joined by the lovely Denise Ratfield of Pink Boots Society and Stone Brewing Co., who (like the dope lady she is) brought #AllTheBeers. Robert French is also back in the studio with us. We try three varieties of Societe’s “The Bachelor”, learn more about Denise, and learn that Jason simply dominates during “Guess That Brew.”

If you have yet to hear about Societe Brewing Company in San Diego, California, well…get in the know! They’re making killer beer in San Diego that’s uncompromising and true to their take on what craft beer should be. 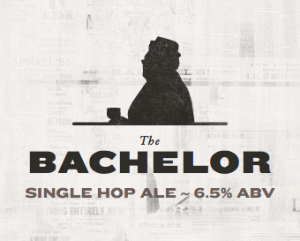 Denise brought three varieties of Societe’s American IPA, The Bachelor, to share with us. These growlers were provided by our good bud, Mike Sardina, Societe’s “Ruler of the Underworld.” Mike is one of the most sincere craft beer geeks we’ve ever met, and he’s a perfect fit over at Societe.

The Bachelor is an ever-changing, single hop IPA. The hops in the beer vary from batch to batch, so you can really get the true essence of whatever hop was used in the beer pretty well.

The first variant of The Bachelor we’re drinking is made with Mosaic hops. Mosaic hops tend to come off very much like passion fruits, and this beer definitely delivers the fruit, perhaps even all over your face.

The second variant of The Bachelor is made with Amarillo hops. Amarillo is a great hop for IPA, especially when combined with Simcoe, so it’s really nice to see it used in The Bachelor as a single hop.

The third variant of The Bachelor is made with Citra. [Citra is so hot right now. So hot.] We all love its citrus-like characteristics and it really shines in this beer. Societe makes some of the cleanest beer you’ll ever drink, and Citra in The Bachelor is a match made in beer heaven.

We’re back for another round of “Guess That Brew.” This time, we’re reading two reviews of two very different but much sought after brews. Jason proves once again that he is the master of this game. Don’t cross this dude—he’ll lay the smack down.

Denise Ratfield has been involved in the brewing industry since 1995 when she worked on the bottling line at Sierra Nevada Brewing Company. She currently works at Stone Brewing Co.’s headquarters as their Brewceptionist.

Along with working at Stone, Denise has been an active member of the Pink Boots Societyas the Social Media Committee Chair. She also recently organized the massive brewday that was International Women’s Collaborative Brew Day. As mentioned earlier, Denise was the event organizer for International Women’s Collaborative Brew Day. The idea was originally brought to Denise and Pink Boots Society by Sophie de Ronde from Brentwood Brewery in the United Kingdom, in collaboration with Project Venus UK (think Pink Boots Society, but in the UK). The thought was to have women in the beer industry from all over the world unite for one day and brew a beer. In this case, it was a pale ale made with Cascade hops—a true classic. A recipe was posted online, and those who participated could tweak the recipe as needed and brew the beer. Over 70 breweries around the world participated. The beer was named “Unite Pale Ale.” Denise is all about the Pink Boots Collaborations these days, and her latest is with Latitude 33 Brewing Company out of San Diego, California. Denise and Kevin Buckley (Latitude 33’s Brewmaster and Head of Brewing Operations) made a 5.3% oatmeal pale ale (ah-hem,John…?) with Nugget, Nelson, Southern Cross, and Motueka hops named “Worldly Scholar.” It’s on draft and in bottles, and it’s available RIGHT NOW! Funds raised from the sale of the beer will benefit Pink Boots Society scholarships.

Denise will also be pouring this beer at Beervana, a two day celebration of craft beer in New Zealand.