As you may remember, a few weeks ago we sampled the Sierra Nevada collaboration Beer Camp 12-pack. We were marginally dissatisfied with most of the beers. It’s not that the beers outright sucked (there were a couple wins), but they just weren’t noteworthy. This week, we decided to try another collaboration mixer. New Belgium’s take on their collaboration “riff pack” differed from Sierra Nevada’s Beer Camp in that every beer is a take (riff, if you will) on New Belgium’s classic Fat Tire Amber Ale. This should be interesting… 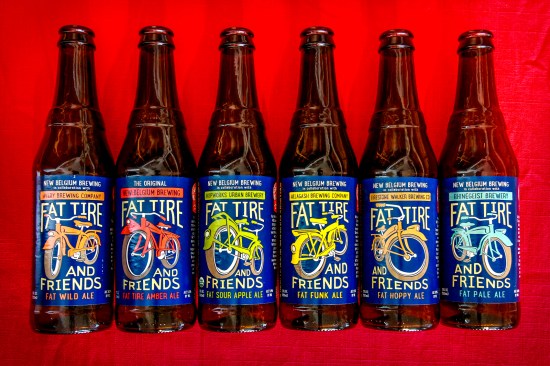 Fat Tire is a well known beer. Its classic label, depicting red “retro” bicycle, can be spotted from a mile away (well, maybe not a mile…10 feet?). It’s safe to assume that even the most experienced beer geek among us has tasted Fat Tire at least once. Fat Tire is ubiquitous, but it also tends to get overlooked by beer geeks in search of something more, whatever that may be.

To celebrate their 25th anniversary, New Belgium called upon their closest beer industry buds to take the classic Fat Tire recipe and mix it up. Maybe change the yeast, add MOAR HOPS, or throw in some apple juice? Rhinegeist, Firestone Walker, Allagash, Avery, and Hopworks all participated in the collaboration. Each beer in the Riff Pack is a unique take on Fat Tire.

Did the beers exceed our expectations? Did New Belgium play it safe or did they really try to brew outside the box and make an interesting group of beers? Listen and find out!