This week on the show, we’re drinking eight beers from Bruery Terreux in celebration of The Bruery opening a second tasting room in Anaheim, California on July 8, 2016! 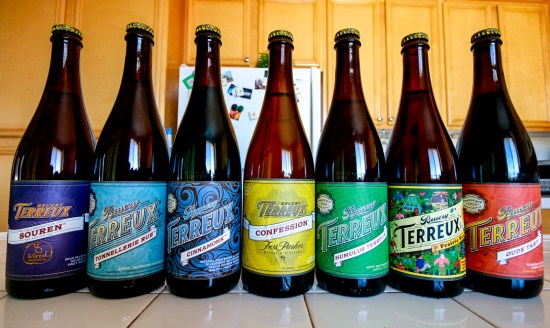 For those not in the know, Bruery Terreux is what The Bruery is branding their sour, funky, and wild line of beers. The beers are all brewed at The Bruery’s brewery, but the wort that is destined to become a Terreux beer is shipped over to the Terreux facility where it’s fermented, inoculated, barreled, etc. This keeps bacteria and bugs away from The Bruery’s “clean” (non-wild, Saccharomyces fermented) beers. Greg wrote an article about the opening of Terreux: Check it out!

The beers on the show this week represent a fairly wide range of what Bruery Terreux is doing. While they’re not all hits, they represent what The Bruery and Bruery Terreux is all about: pushing the boundaries and running wild (pun intended) with creativity.